Members of the Nevada NORML chapters, alongside representatives from Denver NORML, Arizona NORML and the National NORML Board of Directors, participated in Las Vegas’ first Business-to-Consumer Cannabis conference this weekend at the Rio Hotel & Casino. 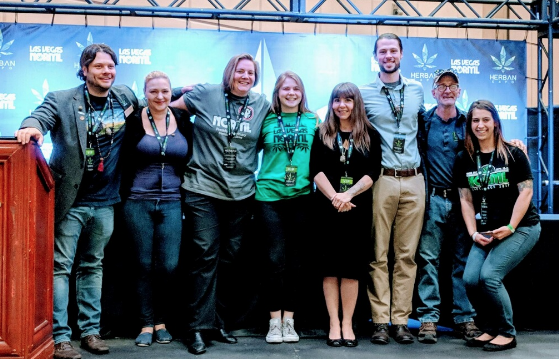 The Herban Expo opened its doors Friday as a free convention available to the public. While there are a vast array of emerging expos and shows within the cannabis space, Herban Expo’s unique focus on consumers and free entry certainly set it apart. With nearly 50 vendors from across Nevada regions and nationwide, the show floor remained a steady source of valuable education and networking all weekend.

It was a great honor that Las Vegas NORML was asked to organize the panels and educational content, for all three days on the main stage. The Las Vegas NORML stage ended up featuring almost 30 panels and presentations, composed of over 60 experts! The feedback from attendees regarding their experiences were overwhelmingly positive. Topics of panels included, “CannaParents”, Criminal Justice Reform, Cannabis is Medicine, Social Use Lounges, How to Start a Cannabis Support Business, and more.

As part of NORML’s call to action over the weekend, members from the various chapters led efforts to collect letters to Congress in support of marijuana reform. Though the goal for the weekend was 500, nearly 600 letters were signed to demonstrate support for the STATES Act, SAFE Banking Act, the Marijuana Data Collection Act and expansion for Veterans’ Access! Attendees of the event were eager to participate in the letter writing campaign and found it to be a great opportunity to familiarize themselves with current federal legislation.

This past weekend hundreds of marijuana related businesses arrived early in Las Vegas for MJ BizCon, the largest Marijuana conference to hit the states, but entry costs nearly $700 for the general public. Herban Expo will return again in 2019 and NORML chapters are excited to remain an active part in the educational aspects in order to bring consumers the most valuable experience possible.

More about this year’s expo and upcoming info for future events can be found at www.HerbanExpo.com. Thank you everyone that attended! See you in 2019! Follow Las Vegas and Nevada NORML on Instagram (@lasvegasNORML & @NevadaNORML) for more information about upcoming events.